Do you have enough information about herbs? If yes, you must have definitely heard about Kratom. However, not everyone knows that Kratom itself has many kratom strains under its umbrella. Well, now you know!

Kratom mainly contains three strains, White kratom, Red kratom, and Green-veined strains. Experts judge the potency of each strain by looking at the color each strain holds. Anyway, one of the unique Kratom strains is called White Horn Kratom. This strain is only cultivated in Indonesia and that too majorly in the Islands of Borneo.

Have you just caught yourself wondering how do people feel after taking White Horn Kratom? We have your back!

Let’s hold the popcorns and read till the end and find the answers to your latest queries.

What Is White Horn Kratom? 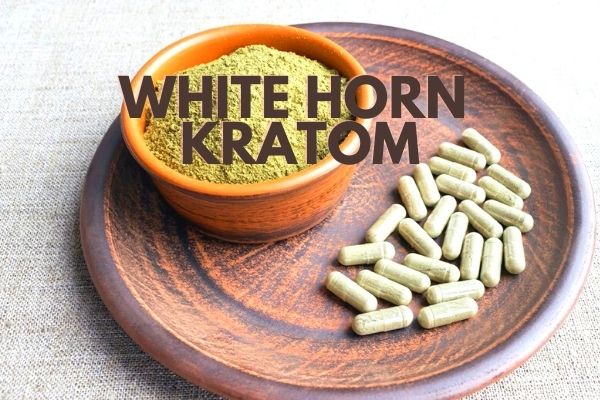 Well, many of you would certainly know about what Kratom is. Kratom is a tree that is known by different names, including Mitragyna Speciosa, Ketum, Thang, Thom, Kakum, and Biak. The leaves of Kratom possess all the benefits this particular tree happens to offer. So, it is not the tree worth appreciating but its leaves. However, not everyone holds enough information about what White Horn Kratom is. White Horn Kratom, which is a unique stain, is named so solely because of the shape of its leaf – it’s more like a horn.

This particular strain consists of a high level of alkaloids, resulting in a great impact on the moods of its users. So, we can say that it is not only about its unique appearance but also the effects it delivers. On the flip side, getting maximum results demands you to consume fully mature horned leaves.

How Do People Feel After Taking White Horn Kratom?

Just like other strains, the effects of White Horn Kratom differ because tolerance levels differ from person to person. In the same way, some people feel its effects more than others.

In terms of its energy-boosting effects, they can last for up to 4 to 5 hours, given that you don’t overdose on it. Besides, people also say that they tend to concentrate better after consuming it. Also, people claim it to be helpful in reducing unease.

Many people often replace their morning dose of caffeine with this strain as they find their results almost the same.

What Are The Available Forms Of White Horn Kratom?

Just as other strains, White Horn Kratom also gives you an equal opportunity to get your hands on the desired form of it. Choosing the forms of this strain depends on your requirement– whether you want to have quick effects or whether you want to consume it mainly to devour its own particular taste. Whatever it is, here are three of the commonly available forms of this strain:

Be glad because this one serves tea lovers well. In order to refrain alkaloids from losing their potency, you can simmer the water to prepare the tea. Moreover, you can also make sun tea or cold brews. One thing which you must not forget is that in the form of tea, you will have to experience its bitter taste. You can avoid it by adding sweeteners or sugar as per your choice.

Looking for a convenient way to carry and store White Horn Kratom? Well, capsules will blend well in this case. By gulping the capsules with water, you will barely come across the bitter taste Kratom holds. Moreover, these capsules are made with vegetable coating, holding Kratom powder inside. The rest of the ingredients are purified water, cellulose, and Hypromellose. One more thing, it is often heard that  kratom capsules take longer to give effects.

Just as other strains, this particular strain is also available in powder form. If you are okay with the bitter taste then you can try this method otherwise you better not. Through the toss and wash method which is to take a spoonful of White Horn Kratom and gulp it down with water, you can use juice as well to avoid the bitter taste to some extent.

Why Is White Horn Kratom Famous?

White Horn Kratom is famous for two main reasons. Firstly, it relaxes the user and secondly, it gives them an energy boost. Consequently, users not only feel calm but also active enough to run day-to-day errands. Furthermore, despite its increased demand, this stain is cultivated in limited amounts while it grows mainly on the islands of Borneo.

How To Consume White Horn Kratom?

Luckily, this type of Kratom comes with plenty of options to consume. Some of the widely used ways are what we are about to mention under this;

The second method is the oldest one, here, the users chew on dried Kratom leaves. In the past, working people used to consume Kratom this way to combat fatigue and stay active throughout the day. This ends up giving the sole taste of Kratom. Consequently, it gives off a bitter taste.

You can swallow it in the form of a pill. It saves you from enduring the bitter taste of Kratom. Moreover, this form of strain is convenient to be stored for a long time.

You can add it to your drinks, for instance, a milkshake. This will, however, be heavy on your stomach.

Due to high demand which is met with low production, people tend to fetch out for other similar options. There are certain strains that deliver the same effects but are either stronger or milder. So, let us discuss with you the other alternate strains for White Horn Kratom.

The strongest strain in the family of White Vein Kratom is White Maeng Da Kratom. It delivers similar effects but it is said to be even more strong.

Borneo is an island and this is where this strain belongs. With the overlapping effects, both these white strains have white veins in the leaves. This ends up making it an alternative to White Horn Kratom.

This strain is cultivated in Indonesia. It is also known as White Vein Sumatra Kratom due to its land of origin– Sumatra Island. It is also one of the strong strains but majorly, people consume it due to its analgesic properties. 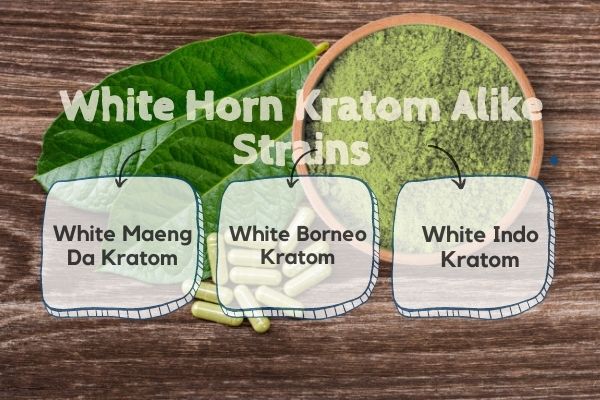 How To Get Authentic White Horn Kratom

It is saddening that lately, the markets are full of immature and compromised White Horn Kratom. In order to get your hands on the genuine one, get in touch with reputable suppliers. The leaves that have horns are the mature ones. Some vendors mix horned leaves as well as others so they can increase the quantity.

There are multiple ways through which people consume White Horn Kratom. From brewing it into a tea to chewing on its leaves and taking it in the pill and powder form, all are the commonly used methods.

Both these strains are alike but people mainly prefer using White Indo in case they only require their discomfort to go away because this strain is mainly famous for its analgesic properties. Whereas, White Horn is used to serving many purposes.

Gladly, now you know the answer to the commonly asked question: how do people feel after consuming White Horn Kratom and a lot more. It is one of the rarest strains of Kratom and many sellers deal in it but just a few offer the genuine one. It has effects similar to that of other strains and also, its taste is comparatively less bitter than other strains.