Being a gift of nature, Mitragyna Speciosa is itself a herb that has been in use for years. One after one, many of its strains as well as forms have emerged to meet everyone’s requirements. Green Horn Kratom is, however, a moderate strength  kratom strain. Anyway, are you asking yourself questions like why is Green Horn Kratom rare? Which strains are similar to Green Horn Kratom? And got more questions?

Fortunately, you are at the right place because we will answer all your questions under this same article. So, let’s begin without any further ado!

What Is Green Horn Kratom?

Coming from the tropical island of Borneo kratom, this strain is also called Green Horned leaf Kratom. Just as is the case with other strains, in powder form, you can’t differentiate between Green Horn Kratom and other strains. However, in its original form– leaf, you can definitely understand why it has the term ‘horn’ in its name. The leaves of this strain have spikes. It is named so because its leaves are more in the shape of a horn while the veins are green, hence the name.

Green Horn Kratom surely has effects similar to that of White Horn Kratom but its effects are milder than that. Mostly, people try this strain if they have a hectic routine combined with the mind carrying wondering thoughts. The consumption of strain helps you stay energetic as well as relaxed. Consequently, you get to work as efficiently as possible with a relaxed mind. 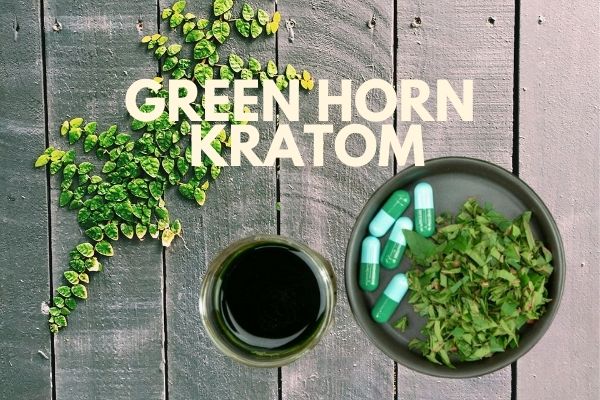 What Are The Popular Consumption Methods Of Green Horn Kratom?

Just as other strains, Green Horn Kratom also comes up with several consumption options. However, the powdered form is the most popular one. The widely available forms of this strain include;

With Green Horn Kratom powder, you can try multiple methods, toss and wash are among them. Toss and wash are when you take some powder and gulp it with the help of water or some drink. However, this way you can’t avoid tasting the bitter taste.

Capsules can be stored for a long period of time and even carrying them is easy. They are usually available with vegetable coating and all you need to do is just swallow them with the help of water or some other drink. It comes in handy to avoid Kratom’s bitter taste.

Kratom extracts hold more alkaloids than Kratom powder. It can be prepared by boiling the plant or powder. Whereas, the same boiled liquid is then strained to separate solid particles. This is further simmered down and then processed into Kratom teas, Kratom oils and Kratom extracts.

The leaves of this strain are less costly than the other forms, guess why? It is because the leaves barely undergo any process and so, they can be directly sold. Also, consuming Kratom leaves is famous for years. The same leaves can be directly consumed by chewing on them or by brewing them into tea. It all depends on how you like it!

What Makes Green Horn Kratom Different From The Other Strains?

Well, one of the reasons that make this strain unique is that its effects can be felt faster compared to other strains.
It is believed by the farmers that the strains that have horns hold the highest alkaloid presence. Consequently, these strains deliver the best results.

It has its own particular but sweet aroma and the leaves possess an intense green colour as they mature.
This strain is grown in Asia but since it is a requirement of almost everyone, it is distributed by vendors all across the globe (wherever it is legal).

Kratom has three basic strains and their potency varies as per the colour. The colour of each stain comes because of the colour of its veins present in the leaf. Red Horn is the strongest among all strains whereas Green Kratom has the effects of both strains but they are mild in nature.

Unlike the majority of other strains, this strain is not named so because of its origin. It can be found in multiple areas of Indonesia. It also goes through a drying process.

What Are The Alternatives To Green Horn Kratom?

Due to less production but high demand, it is not always easy for Kratom-heads to get their hands on this particular strain of Ketum. However, this doesn’t mean at all to miss on its benefits. Consequently, people opt for other strains that hold somewhat the same effects. Want to know what these strains are? Let’s read!

When it is about mood-boosting qualities, both these strains are pretty much alike. This strain also barely sedates but along with it, it does not contain many analgesic properties either.

Red Maeng Da has a lasting duration as much as that of Green Horn. It serves as a balance between stimulation and sedation. However, it can be highly sedative than Green Horn Kratom.

Apparently, it seems like white strains are not as potent as other strains, including Green Horn Kratom. However, White Maeng Da shares some similar stimulating effects. People often use it even when they have to meet a hectic routine as it does not immensely sedate if taken in an appropriate dose. 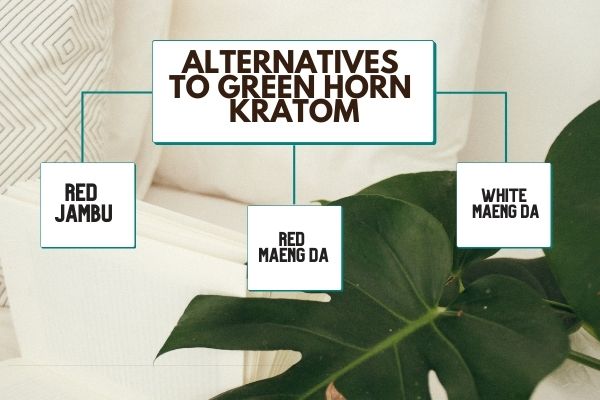 Hurray! Now you certainly know the answer to which strains are similar to Green Horn Kratom and a lot more. Holding almost all the qualities of Kratom, it is said to be bitter and also, majorly people having an active lifestyle are head over heels in love with it.

On the flip side, one thing which is recommended for all Kratom lovers is that one must start off with the lowest dose possible and later increase it as per demand so as to keep a safe side. If you liked reading this article then don’t forget to spread the knowledge.

Are Green Horn Kratom And Red Jamba The Same?

Although both these strains have somewhat similar effects, they can’t be the same. Red Jambu barely has sedating effects but it does not hold analgesic properties either.

It is a fact that this strain is rare and as the horns are present only on the mature leaves, it has a low supply. Consequently, markets are full of its quantity but short on quality. So, the only way to keep your safe side is by only approaching trustworthy vendors.

Does Green Horn Kratom Have A Separate Tree?

Not at all. It is a misconception. Actually, all three leaves, Red, White and Green come from the same tree but the green ones are located in the middle. After the red strain, this strain receives more sunlight as well as hydration.