Herbal therapeutic remedies are a huge rage all over the globe these days. Day by day, different herbal substances are emerging in the US that are thousands of years old but only now receiving the much-needed appreciation in the western countries.

Ketum is also such a herbal plant that has now gained immense popularity among millennials. Although people have started to pay attention to Ketum only in 2016, there are 10 to 15 million Kratom users all over the US. Thanks to this popularity, vendors are also busy experimenting with different blends and introducing new ones almost every other day.

However, this overload of Kratom strains can also cause misinformation on the consumer’s end. It is better to study and research the brand before getting inspired by the fancy names and trying them at the first chance you get. In this article, we’ll be talking about such a Kratom blend that is unknown to many users. That is Trainwreck Kratom!

What Is Trainwreck Kratom?

Trainwreck Kratom is a hybrid blend of multiple strains of this herb. It is also often dubbed as a “full-spectrum strain.” The name ” full-spectrum” is inspired by the nature of light that contains all the colors. Similarly, this special blend consists of all different vein-colored strains of Ketum. However, most of the vendors are particularly secretive about the exact recipe of Trainwreck Kratom.

We don’t know whether it is manufactured using a unique technique like fermenting for a longer time or drying the leaves under direct sunlight. The reason for this mystery might be that every vendor has a different recipe. They all must use different ratios of the most potent Kratom strains. This might be why users don’t get the same effects by using this botanical from two other sellers.

Nonetheless, some Kratom sellers have claimed that their special Trainwreck Kratom blend consists of a unique combination of 11 different strains in all red, green, and white-colored veins.This large number of strains add to its potency and efficacy greatly. The greater amount of alkaloids and other chemicals present makes this herbal remedy best for fast and effective symptom relief.

Interestingly, its name “Trainwreck” has been given in light of this Ketum blend being as strong as the Trainwreck CBD strain that seems to just hit the users like a freight train. Its properties of increased stimulation and strong cerebral action are also why it is dubbed after its Cannabis namesake. 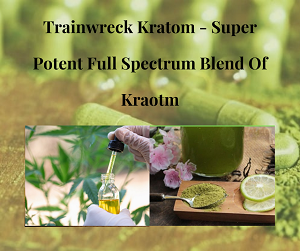 Is Trainwreck Kratom More Effective Than Other Kratom Strains?

Well, it is -according to many users. Many consumers think that they have experienced enhanced benefits by using this full-spectrum strain.While some also think that it is just an overpriced blend with a fanciful name. They also believe that 11 strains might be too many to work together in harmony.

Just as the proverb says that too many hands spoil the broth, this can also be the case with this much-hyped Speciosa plant. Another reason for negative reviews is also that all vendors don’t follow anyone’s recipe. Users get varied effects from Trainwreck Kratom bought from different traders. This is also why some users think that it’s just a publicity stunt and a total fraud.

Nevertheless, Kratom dealers who sell Trainwreck Kratom claim that this blend is more potent than Maeng Da Kratom, the strongest Kratom strain ever. Moreover, its effects are also considered to be lasting for a longer period than White Sumatra. It is important to mention here that White Sumatra is dubbed the longest-lasting Kratom strain. That must say something about the expected effects of this herb.

What Do The Users Say?

A Ketum user, Philip has shared his personal experience in a blog post. After using this mix of different strains, he felt long-term energized even during his job time. Moreover, the user also had a great mood boost and slight euphoria. He concluded it as a good stimulating Kratom blend and cautioned users not to take a large amount as it can be extremely overwhelming.

Another user had an amazing experience using Trainwreck Kratom. In his own words, “I was friendly, happy, and motivated. I had energy, and it seemed to go on forever. Yet, I was also very relaxed, and my back and neck agony was reduced to being nonexistent.”

One user on Reddit has tried Trainwreck Kratom and claims that it is more stimulating than the usual strain he takes. On the contrary, he has complained about its horrible taste and that he couldn’t find a big difference between this blend and a plain Maeng Da strain.

What Should Be The Optimal Dosages For Trainwreck Kratom?

There is no specific quantity that can be recommended for every user. How much of this herbal plant you need depends on several factors. Your gender, body weight, and height can influence your Mitragynine intake. Your metabolic rate and tolerance level also impact the amount of herb you will need to produce the desired effects.

Additionally, how you choose to ingest this plant also modifies your dosage selection. For example, smoking or vaping Ketum produces faster effects, but you might need a large amount to elicit the desired outcome. Most importantly, it is always best to consult a professional health provider to ascertain the exact doses of this potent blend that you will require for your health condition. Nonetheless, the general rules for Kratom dosing are the same for almost every strain.

If you are a newbie in Ketum usage, it is best to start from simpler and much less strong strains, as Trainwreck Kratom can prove to be quite strong for you. Once you get used to simpler strains, switching to Trainwreck Kratom will be an easier move. Moreover, starting at the lowest possible dosage is considered the best option. You can then climb your way up very slowly and cautiously until you get the best possible relief from your symptoms. However, keep in mind that it is a hybrid of more than ten strains, and using more than 1 gram as a starting dosage can prove to be quite overpowering for you.

Where To Find The Best Trainwreck Kratom?

As we have already discussed that Trainwreck Kratom does not have one particular recipe. Every vendor makes its version of this extraordinary blend. Once you find a good seller whose version you like the best, you will have to stick to them to get the same product consistently. That’s why you must find a vendor that sells all-natural and high-quality Trainwreck Kratom with good prestige. Moreover, this blend is not commonly available at local shops as it is relatively a newer addition to the Ketum family.

Setting your eyes on online vendors might be your best bet in finding the best quality of this Speciosa variety. Before deciding to buy from any seller, make sure that you do your complete research first. Look at the customer reviews and see what the other buyers have to share about their experience of using this herbal blend. You have to ensure that the product you are investing in is from a reputable and trustworthy dealer.Here are some of the vendors that sell 100% authentic Trainwreck Kratom:

Krave Kratom is a well-respected seller. They handpick their own Mitragyna leaves and dry them to ground in powder. They sell authentic Trainwreck Kratom in both capsules and powder form. The lowest quantity of 60 grams of powder is rated at $24.99, and a pack of 30 capsules at $15.99.

This is another vendor that sells 100% guaranteed, best quality, and all-natural Trainwreck Kratom. GLA Kratom also has both powder and capsules in its product list. They have capsules in packs of 50, 100, and 1000. Fifty capsules are sold for $19. They also sell powder form in 15 grams, 30 grams, 250 grams, and a mega deal of a kilo pack. The price of 15 grams of Trainwreck Kratom here is $10.

Earth Kratom is another trader of good quality Kratom. Users have all the praises for their Trainwreck blend. They have all kinds of rare strains and combinations that are hardly available at other places. Further, they are also much more cost-effective than the other sellers.Their product range is available at the My Ketum club. They have 65 capsules of this herb for only $17.99, 150 capsules for $31.99, and 300 capsules for $47.99. 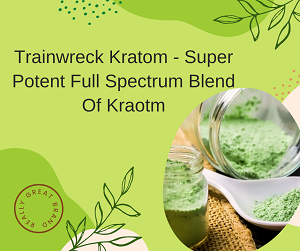 Trainwreck Kratom is not a proprietary strain but a blend of 11 strains that includes red, green, white, and even yellow vein Mitragyna- as claimed by several vendors. It does not have any specific recipe, as every brand mixes its collection of Kratom strains. This makes it difficult to ascertain what type of health benefits you can attain by its consumption.

However, users have insisted that it is more potent and stimulating than the other strains. All in all, it is a novel Ketum blend and an expensive one at that. Whether it is a scam or an authentic blend, we are unsure because it might vary from brand to brand.