Red Kali kratom sometimes gets confused with Red Bali because of the name and their place of origin. They both come from the same region but do have varying effects. Red Kali is often considered the original kratom strain and was a favorite strain. Nowadays, it’s more popular with students and professionals but is gaining traction among the community again. But why was Red Kali pushed to the side for Red Bali? Just how different is it from Red Bali? Read on to learn more.

Contents show
1 About Red Kali Kratom
2 Key Features
3 Primary Alkaloids
4 Effects and Dosage
5 How Popular is Red Kali Among Users?
6 FAQS
6.1 Q#1: What is the difference between Red Kali and other Red Strains?
6.2 Q#2: What do Reddit users say about Red Kali Kratom?
6.3 Q#3: Difference in Red Kali Capsules VS the Powder?
7 Final Thoughts

Red Kali kratom is a favorite among veteran users of kratom. Red Kali is sometimes referred to as the original kratom. Most newer users are more familiar with Red Bali over Red Kali. Red Kali comes from the Kalimantan Island of Indonesia. Kalimantan Island is commonly known as Borneo. The Borneo region where Red Kali grows has an intense tropical climate. It has very high temperatures and humidity. That combination makes it ideal for the growing and cultivation of Red Kali.

Red Kali has similar properties to other red vein strains of kratom. There are some major key differences. One of these differences stems from the plant’s potency. Red Kali is considered to be one of the strongest red veins available due to its growing climate. Red Kali leaves require ample amounts of the sun for the vein to get potent alkaloids. The effects are another key feature of the Red Kali. While it is more potent than other red veins, it does have a difference in how it affects people. This is because of the type of alkaloids present in Red Kali.

Red Kali contains a large number of alkaloids. Several main alkaloids give Red Kali its potency. Red Kali has the two most common in all strains: mitragynine and 7-hydroxymitragynine. The other alkaloids that Red Kali has been

The combination of all these rich alkaloids provides Red Kali with its effects. 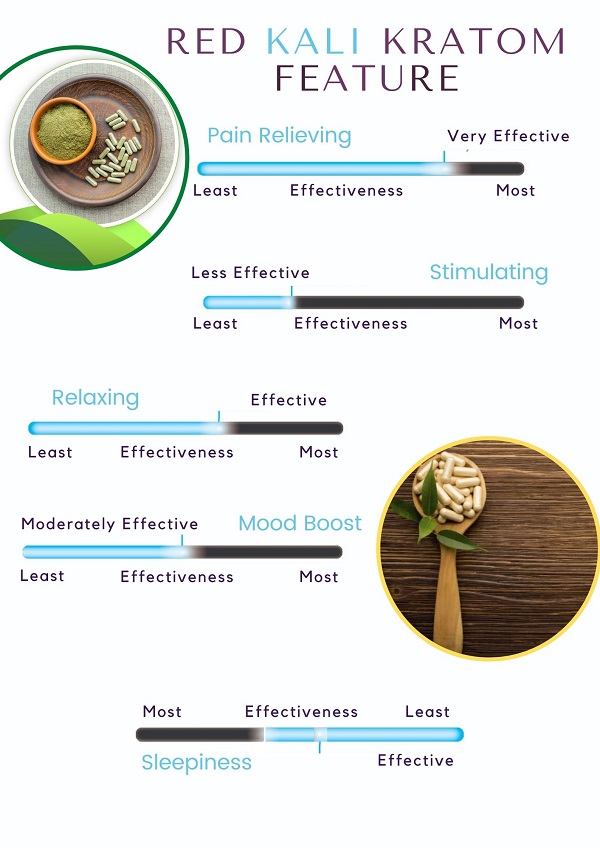 It should be noted that before we dive into effects and dosage the FDA, CDC, and DEA caution the use of kratom products. Kratom isn’t regulated or approved by the FDA, so there is a chance you can receive contaminated kratom or low-quality. In fact, the FDA doesn’t recommend the consumption of kratom at all and a safe dosage can’t be recommended because little is known about kratom. Nevertheless, there are still people that take kratom and report feeling certain effects when consumed.

Many factors determine how your body will metabolize kratom like your

Now, while we can’t state that’s what kratom does, we can provide you with other users’ reported experiences. Many users report similar effects to Red Bali but say it differs in some ways. Users say Red Kali helps relieve the pain symptoms they have. It’s also believed to decrease anxiety or depression by making the user calm and helps with sleep. Some even report feeling improved moods. There is some evidence to support kratom could potentially have these effects on users, but more research needs to be conducted before it can be taken as fact.

How Popular is Red Kali Among Users?

Red Kali used to be the strain of choice by veteran users. This was because it wasn’t really talked about by newcomers and it’s not widely available like green strains or Red Bali. However, with word of its existence getting out, it’s becoming more popular among students and working professionals. Its popularity among them is thought to be due to the effects users experience (Calmness, Sleepiness, and Mood Boost).

Q#1: What is the difference between Red Kali and other Red Strains?

A: Red Bali and Red Kali are both very potent red strains. They do have some similarities and differences. One similarity they share is the reported analgesic and sedation effects. However, despite the sedation effects, users say Red Bali is slightly more stimulating than Red Kali.

Red Horn Kratom is considered unpredictable. The effects it has can vary from user to user. The effects also last longer and are quite strong. It’s a popular and sought-after strain because of this. Red Kali is quite predictable compared to Red Horn.

Red Sumatra has similar properties to Red Kali like calmness, sleepiness, and improved mood. However, it differs in a few ways. Many first-time users tend to feel very sick on this strain of kratom. The exact dosage isn’t well known, and it tends to be unpredictable on how you’ll feel (the good effects or bad).

Red Bentuangie is very close to Red Kali in terms of the reported effects. It does share some of the alkaloids too. One major difference that users report it lasts longer than many other red strains.

Red Maeng Da is the most similar to Red Bali. It’s grown in a climate like Red Kali, which gives it its potency. However, it has a reported simulation effect instead of sedation and not as many negative side effects that the majority of energy-boosting strains have.

Q#2: What do Reddit users say about Red Kali Kratom?

A: One user raved about the strain,

It had me very relaxed and euphoric feeling pain-free.

Another claimed it took away their stomach issues and helped them sleep,

I started using kratom for the pain and my other problems. Didn’t even take any of my big farm meds last night for bed. AWESOME strain.”

However, one user reported that they didn’t feel any difference at all,

Q#3: Difference in Red Kali Capsules VS the Powder?

A: Capsules release slowly into the body because your body has to go through the digestion process. This means it’ll take longer to feel the effects but that they’ll last longer than other methods. Powders are quickly absorbed and act quickly. This means you’ll feel the effects sooner, but they won’t last nearly as long as capsules. It’s also true that some users can’t stomach the taste of kratom and prefer capsules.

Red Kali seems to be becoming a more popular strain as more word gets out on it. This is especially true among students and professionals. Those that are long-term kratom users are familiar with this strain and enjoy the effects they feel. However, this strain isn’t the easiest to get your hands on, so often people will settle for other red strains of similar potency like Red Bali. Overall, it’s a super-strong strain that doesn’t seem to suffer from the negative side effects that other red veins do and if you can find a vendor, it’s worth trying.