Kratom has been the subject of dispute for a long time between several states around the world. Due to its lack of research, some states have banned its consumption. While in some states it is legal and can be consumed without any check.

The herb is quite popular in the United States. Several US states like California, New York, and Illinois have made the consumption and possession of Kratom legal.

Chicago is one of the cities in Illinois where the herb is used legally. What are the legalities for the consumption of Kratom in Chicago? Is the usage of the herb popular in the city? Where can you easily get access to buy Korth?

This article highlights particularly the legality aspects of speciosa in the state of Chicago, Illinois.

For anyone who doesn’t know what Korth is, here is a brief introduction for you. Kratom, also known as Mitragyna speciosa, is a plant that is part of the coffee family. The plant is found in abundance in Southeast Asian countries.

It contains 37 different alkaloids from which mitragynine and 7-hydroxy mitragynine are the two most active compounds.

It is consumed globally for different purposes. Some use the dried leaves to make  kratom tea while others take it as  kratom capsules or in  kratom powder form.

What Are The Legalities Of Kratom In Chicago, Illinois?

If you are living in Chicago and you’re not a minor, you don’t have to be pressurized at all about getting caught because buying, selling, and consuming Korth is completely legal in the city.

While a huge number of individuals buy Ketum to work on their personal satisfaction, there are many trying to ban the use of it. Several bills have been formed against the use of Korth but these bills were never considered therefore, the use of the herb stayed legal.

With that law, other cities in the state of Illinois also passed a bill related to the complete ban of Korth in the city. Jerseyville was the first city of Illinois that banned Korth in 2017. The same law was followed by Alton in 2018 and Edwardsville in 2020.

Apart from the 3 cities mentioned above, Ketum is legally and freely used in Illinois.

The residents of Chicago and other cities of Illinois can relax as the possession of the herb is rightful.

What Is The Role Of The American Kratom Association?

AKA is the acronym for American Kratom Association which is an organization that works in the favor of the usage of Kratom. It was initially started in 2014 by Kratom consumers – for Korth consumers.

It is a not-for-profit organization that is working to research and spread information about Korth. It also supports the herb in legal matters and fights against those who wish to ban the use of Kratom.

The AKA believes that everyone in the United States should have full access to Kratom and Kratom-related information. They should have the freedom to make their own choice related to their health and well-being.

One of the significant roles of this organization is to make sure vendors that are selling Korth maintain the quality of the herb and are following all the rules stated by AKA. The NGO provides certificates to specific vendors that make them a member of AKA.

The vendors are strictly supervised by the American Kratom Association hence, it is safe to presume that buying Ketum from the certified vendors will be of high quality.

Is Kratom A Popular Herb In Chicago?

The herb has never been more famous than it is today. People in Chicago have multiple vendor options to buy Korth from. Some vendors are well established and are popular for their quality goods while other new vendors are also trying creative ways to compete with reputable providers.

Kratom is available for everyone who is above 18 years old. You can buy the herb from any local shop like the vape shop in Chicago. In addition to this, there are several online stores that will deliver Korth to you at your doorstep.

Now that you know that speciosa is legal in Chicago and numerous vendors are available to fulfill your needs. Let us dive right in and know about the stores and online websites where you can easily buy Korth in any form you like.

How Can You Buy Kratom In Chicago, Illinois? 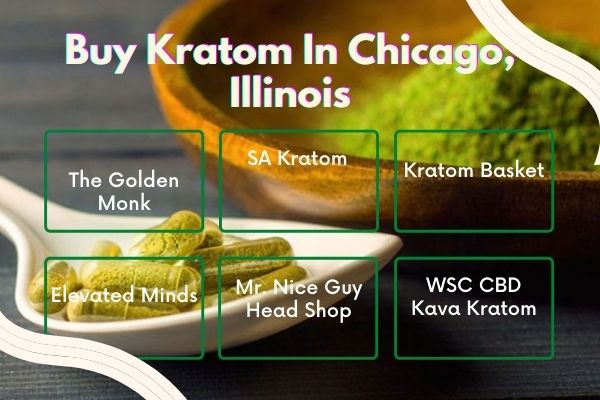 Buying Kratom online is now the easiest way to get access to the herb in various forms like powder, capsules, gummies, and tinctures.

Since Kratom is legal in Chicago, you can get high-quality Korth from local stores as well as order it from various online companies. They are the most popular and reputable firms in the United States.

The following e-stores of Ketum are:

Golden Monk is one of the most popular and best-rated online Mitragyna companies. It claims to provide 100% satisfaction to consumers. Many frequent buyers of the company said that the company is reliable and also provides huge discounts to customers who are loyal. If you wish to build a long and genuine relationship with any Kratom provider, the Golden Monk is the right choice for you.

SA Kratom trades the herb with the finest quality. The quality, purity, and concentration of Korth is thoroughly checked before selling it to the customers. The company offers 50 different Mitragyna products and the product line consists of tablets, powder, and crushed leaves.

Kratom Basket’s quality of products is unquestionable. They offer a variety of products under one umbrella. They also offer discounts to multiple customers which creates customer satisfaction. The company claims to provide authentic, pure, and exclusive Ketum -based products.

The following local stores in Chicago from where you can buy Kratom are:

The shop is located near North Avenue and it sells Mitragyna supplies and CBD. The customers who have shopped from elevated minds have always been satisfied with the product. The shop has a 5-star rating on Google so if you are in Chicago, near North Avenue, make sure to go visit the place.

This store is another amazing option if you are in Chicago. It is located in 7 different places throughout Windy City. The shop also has a 5-star rating because the customers are completely satisfied with the quality and price of the product and also the services rendered by the staff members of the shop.

The store is located in Steger, Tinley Park, and Manteno in Chicago which makes access to Korth products easy. They offer a wide range of Korth products like capsules, extracts, powder, special WSC Ketum powder, and tablet combos. The business also has an online website from where customers can buy Korth products and get them delivered to your house.

At present, the production, consumption, and distribution of Kratom in Chicago are lawful. The law states that individuals who are above 18 years old will not be charged in any way for the use of Mitragyna. If minors are caught doing Korth-related business, then they will face severe punishments.

Even though the herb is legal at the moment, nobody is sure whether it will stay that way or not. There are chances that Mitragyna will get banned in the near future but AKA and other Korth enthusiasts are fighting against it.

Q1. Is Kratom legal in Chicago?

Yes, the consumption and possession of Korth are legal in Chicago.

Due to a lack of research, some people are trying to ban Mitragyna in the city so nobody is sure what will happen in the future.

Q3. Which cities of Illinois banned the consumption of Kratom?

Jerseyville, Alton, and Edwardsville are the three cities of Illinois that have banned the production, consumption, and distribution of Mitragyna.

Q4. Where can we buy Kratom in Chicago?

There are several local stores in Chicago that offer Korth products. In addition to this, there are multiple online companies that are extremely reputable and deal with high-quality Korth.