There is a multitude of strains that accompany the Kratom brand, and one of them is Green Vein Kratom. Green Vien Kratom is like most other strains of green, any kind of Kratom, and has nearly the same benefits. However, the difference is that Green Vein Kratom is primarily grown in Malaysia.

What Is Green Vein Kratom?

Green Vein Kratom is a strain of Kratom that is specific to the Malaysian country. It is made from the ground leaves off of the mitragyna speciose plant. It’s becoming vastly popular in the United States because it is a common strain for beginners. It is grown in Thailand, Indonesia, and most commonly, Malaysia. All leaves for any mitragyna speciosa plant or tree, are green. However, they are named green veins because the veins on the leaf are green, as opposed to red or white.

What Is Green Vein Kratom Used For, And What Does It Feel Like?

Green Vein Kratom is used to help with a variety of ailments. It may help to treat a plethora of disorders and health problems.

There is a lot of uses for Kratom, and it can be used in a myriad of ways, including;

You will feel a variety of different ways depending on the strain of the green vein Kratom.

What Are The Effects Of Green Kratom?

There are at least four different effects that will allow a user to want to try these products. In green vein Kratom, there are multiple effects that one can have while using the product, it may help in a variety of ways with pain management. Especially in the areas of functioning, reasoning, memory, motivation, and creativity. This is all within healthy individuals.  Many users report, it may act as clean energy and making you feel more of certain good qualities.

What Are The Top Green Vein Kratom Strains?

There are a total of 11 green vein Kratom strains, and the top five  are as follows:

Green Elephant Powder is a product exclusive to Indonesia, and well worth its value. It is a rare strain that grows deep in the jungle, and is hard to harvest, as many spots in Indonesia can’t grow it. It is also rare in the fact that it is harvested from high-quality Kratom trees that have unusually large leaves. These leaves are large enough to look like elephant ears, thus the name. Green Elephant Kratom also has the effects of euphoria stimulation. There is also a sense of increased energy as well as an overall sense of well being when used in the 2.5 to 5 grams range.

This is another rare strain that is particularly fond of growing along the Kapuas river that runs on Borneo Island. It’s known for its high alkaloid content and its unique effects. It is also grown and harvested in the deep and dense jungles of South East Asia. It is unique in the fact that it shares both the soils of Malaysia and Indonesia and shows combined effects.

It has origins that start with its initial roots in the wild island of Sumatra but is now grown in other parts of Indonesia. It has strong effects and high potency because of its high alkaloid content, which is one of the many reasons for its rising popularity in the west. This is a well-balanced strain that has a blend of strength and long-lasting effects. The euphoria kicks in in a few hours, and you’ll still get that pure, clean energy. The benefits of the strain are that it’s potent, soothing, and helps to relieve pain, which is why it’s atop the strains when it comes to effects.

Borneo is a strain that helps with a plethora of things. This strain, as you can imagine from the name, is from the Indonesian island of Borneo. While this is a great strain, it isn’t as potent at low doses, but high doses will have you sleeping like a baby in no time at all. 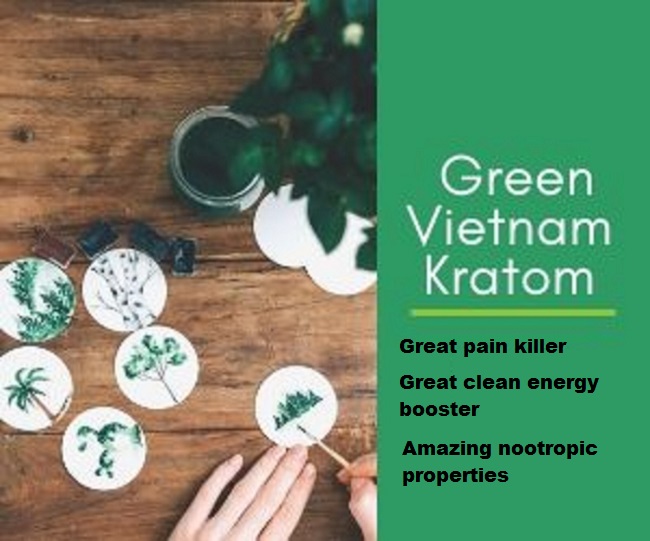 The Green Vietnam Kratom strain is as its namesake grown in Vietnam, and deep in the jungles of Vietnam to boot. This is one of the better strains to help with social anxiety, as it allows the user to feel better and happier about themselves, and helps them to get out of their shell.

Green Raiu Kratom is a relatively new strain of Kratom, and it is hard to compare to the rest of the popular strains. What it lacks in name, it more than makes up for in effects. It has a vast range of properties that it helps with, and some of them resemble some of the red and white vein strains. It is grown in wet tropical climates and is located in the central-eastern coast of Sumatra. It is grown in a wet and tropical environment and has moist and mineral-rich soil.

This is one of the strongest strains on the legal market. It lacks any of the other green vein properties. However,  It is one of the most unique strains, as it has high potency. This means that you are still able to focus on work without the effects of being a hindrance to your day. It is one of the few Thai strains that allows you to work instead of run and do outdoor activities.

This is straight Thailand Kratom, and it’s, to a lot of people, THE premium choice, and their only one. Thailand is known for having the best green Kratom strains on the market, and that reputation follows them with this one.

This is a strain of pure Malaysian Kratom, hints the name Malay Kratom. It is best used in its powder form and is fastly rising as one of the best strains in the market period. It is a strain that makes people want to have more.

Bali is one of the best strains for beginners because of it’s mild and well-blended effects. It is one of the few green strain plants that also have some effects that are normally found in the white and red vein strains. It has a unique potency, with mild effects, and a relaxation.

What is the Difference Between Green Vein Kratom Shots, Powders, and Capsules?

There is a lot to discuss on the topic of Capsules, Shots, and Powder, so we’ll start with the former. Capsules only contain 1.3 to 1.5 grams of Kratom in each capsule. They range in price from $15 and up, starting with 25 pills. With shots, you can get up to 10 grams in a 12 ml shot and use that once a day. However, the high dosage might not be the best for you. With that being said, people do like to use it, and it is around $15 per bottle. Finally, the powder is the one that you can blend and add to tea. You can control exactly how many grams you take, and what you need to use it for. They are also only $5 to $10 for a bag of a few grams. They all have positives and negatives, and ultimately it’s up to the user which they prefer.

What Is The Most Potent Green Vein Kratom Strain?

While there are many choices up there, there is a clear victor when it comes to potency, and that would be the Green Maeng Da Kratom. However, with so many strains up there, there are the best effects which would have to go to the Green Raiu Kratom, and the most relaxing strain which would go to Green Bali. The most unique strain is definitely the Green Elephant Kratom. So the point is that there are more potent strains, but every strain is different and unique in its own way.