What Is 15x Kratom Extract?

Ketum is a herbal extract from an evergreen tree grown in Southeast Asia. Extracts are concentrated alkaloids from the ketum leaf. Ketum extract can be used to make a liquid product.

15x kratom extract is a concentrated and strongest form of ketum. It is so strong that only half a gram of it will show visible effects on an individual’s body and what makes it better than other products is that it is dry, lightweight, and has an incredible texture that can dissolve in any solvent; you can mix it any beverage or gel capsule, the fineness of the texture puts it to use in any way. Some people prefer extracts because they are more concentrated than others easy to take and travel with.

Ketum extract provides you with extra strength and effects. The effects usually start in 5-15 minutes of using and ingesting it. 15x kratom extract stimulates your body and reduces discomfort at smaller doses, and it helps you think properly without any barrier. In addition, 15x kratom extract gives you strong energy and decreases tiredness and bodily ache; it also puts you in a better mood. Sedation is also a trait of 15x Kratom, but to achieve a relaxed state of mind, you will need a higher dose that may even put your body at risk. The effects of it can sustain up to many hours.

A 15x kratom extract needs crushing up ketum leaves. After that, they are boiled in water for a long time until the water wears off, leaving a sticky and thick substance behind, also known as resin. Next, these resins are dried and evaporated until it forms a hard substance that is later ground into powdered form; that powder is then known as 15x kratom extract.

Who Should Use 15x Kratom Extract?

Ketum is most popular among people aged between 25 – 55. 15x Kratom extract is most common in people who want to get away with tension and relax.

ketum is most commonly used to lessen tension and body ache. You can use smaller portions to boost your day without any condition, but you have to be aware of the amount you are using because you can get addicted to it.

Ketum has been used as a traditional home remedy in Asia for hundreds of years; it acts as a mild stimulant if used at smaller doses.

Higher doses will give you soothing effects and make you feel relaxed and comfortable, but it can be harmful to long-term usage; you should always be careful and aware of the intake of ketum.

Ketum is mostly favored because of its stable traits. Ketum today is available never everywhere and easy to buy. It is most commonly used to relieve sadness and put you in a happier and better mood, but excessive use can make you feel irritable and grumpy.

15x Kratom extract is one of the most popular ketum extracts available today; ketum extracts are produced from solidified resins of crushed ketum leaves and wait until the water wears off, and this solid substance is formed, which we call resins, it is then grounded into the powdered form of 15x kratom extracts we have today.

15x kratom extract seems to be the most preferred among ketum users because of its long-lasting effects. It may work as either a sedative or stimulant, depending on the amount of dosage of your intake. 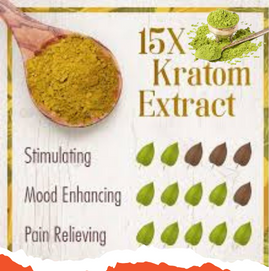 Here are some of the effects of 15x kratom extracts:

Ketum extract becomes a potent sedative when taken in higher doses. Users may feel a lot calmer and have a peaceful state of mind. It gives you soothing effects and can also help you rest better.

This herb also serves as a reliable source of energy when taken in smaller doses; most users take the extracts at the start of the day to get energy boosts throughout the day, it is more like your morning coffee but whereas coffee may give you tension if taken excessive ketum boosts your mood and gives you stimulating effects.

One gram of 15x kratom extract is equivalent to 15 grams of crushed ketum leaves, and you have to regulate the amount of your ketum intake carefully; many users feel the effects only by consuming half a gram of 15x; it is recommended that the beginners start with 0.5 gram and then gradually increase up to 1 gram.

Some users claim that you have to consume 4-5 grams of 15x to maximize the effects; nevertheless, you recommend starting with smaller portions because some users claim to get addicted.

How Is 15x Kratom Extract Made?

15x Kratom extract is one of many ketum extracts sold on the market today. These extracts can go from 10x to as high as 100x. One gram of 15x is equivalent to 15 grams of crushed ketum leaves. 15x kratom extract is the most popular and serves as a standard extract. It is dry and has an excellent texture. The unique texture enables it to be soluble in any beverage.

Ketum extracts are prepared by excessively long boiling of raw ketum leaves. After the boiling, the mixture is set for evaporation until the water wears off, leaving a thick and sticky substance that solidifies. Also known as resins, resins are more concentrated and have a higher number of alkaloids. The mixture is very dark in color.

The end product is rarely sold; vendors shape it as per their preference. These resins are grounded to get the powdered form, oil, or tincture, liquid by state.

Ketum extracts are the kratom products that provide extra strength; it is widely used in remedial doses as mood-boosting and stimulants.

There are many ways for an individual to take this ketum, people native to it tend to chew on its leaves, but it also comes in other forms like pills, ketum capsules, gum, and extracts. You can take the 15x kratom extract and put it in any beverage. It has an excellent texture, so it is soluble in any liquid. Some people even mix it in just water, though it’s not favored for its taste.

The “X” in 15x represents the grams of leaves crushed to produce one gram of 15x.

Fifteen ketum leaves were crushed to create one gram of 15x kratom extract. The number defines the potency and effectiveness of a section which is always greater than the powdered form.

The alkaloid count in these extracts is usually higher than in ketum leaves; the alkaloids are the same 7-hydroxy mitragynine and mitragynine, but their number increases, making the quotes more concentrated and long-lasting. 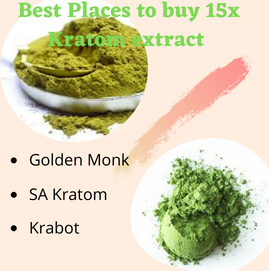 SA Kratom is a web-based retailer that started its journey with the main motive to source the best ketum essence from kratom leaves. They continued on their ketum venture with a specialist bunch and close by kratom house subject matter experts, and it without a doubt required a great exertion in getting client reliance. Presently they have come to hold such an angry online market. In any case, SA Kratom made these unreasonable arrangements possible in light of their unparalleled organizations and client help. Nowadays, SA Kratom is known for its great ketum products. People are very mindful that this store is respectable and gives great regard to the vendors.

The Golden Monk Kratom is a ketum vendor known for its incredible quality. The vendor set out on its excursion in 2016 in Canada, yet later they moved their base camp to Las Vegas.

Golden Monk promised to pass pure Kratom on to get its creativity. They ensure that they keep the quality and rules set. Moreover, this could be provided by seeing they are effectively participating members from the American Kratom Association GMP Program.

Krabot is a ketum provider that purportedly uses acquired strains from the first lands of Southeast Asia. Beyond what might be expected, they are viewed as the most critically assessed vendor of kratom stock with an overflow of 12,000 happy studies; Krabot moreover conveys some ketum items that are pretty looking. To be more specific, the retailer is furthermore offering teas and concentrates, in any case, the standard powder and containers transport technique.

This medium gives an extended decision to every individual, making it a sensibly complete brand. Unassumingly, even their prices are recorded at a satisfactorily wide reach to allow everyone to try their items.

A certain user claimed that they used a little bit of it with vodka. Although, according to them, they didn’t expect to see results because it was a very small amount; even with low expectations, they did see results “it improved my mood. I want to try it again,” they said.

Another user mentioned that it took them 2 grams of 15x kratom extract to work for them. However, the section caused their minds to get clearer and more stimulated, like coffee.

In general, everything works differently for each individual. For some people, a small amount of it may show really good effects, and for others, it may take a higher dose, but it is recommended to start with a lower dose so that your body won’t have negative effects; also higher amounts for the long term may even get you addicted.

Its effects kick in very shortly after the intake, and it has also been advised to mix ketum powder in these extracts to reduce potency.

15x Kratom extract is one of the strongest forms of ketum, which has been getting a lot of attention lately because of its long-lasting effects; it boosts your energy, relieves tension, and overall makes you feel a lot happier and attentive, it may even make some people feel like they can conquer the world because of the energy and motivation it gives, you feel more ready to do your day to day tasks and feel more stimulated if taken a lower dosage.

Still, If you have taken a higher dose, you’ll have sedative effects, and your mind will be clearer. In addition, your body will be in a relaxation mode; you may even feel drowsy; even though the effects of higher dosage are euphoric, you should still stick to smaller portions.

According to users on Reddit, it can harm your body in the long term. You can get addicted and irritable and nauseous if you take the higher dose, “it seems adventurous at first to take a higher dosage first, but It has negative effects on a consumer in the long term run.” Therefore, you must regulate the amount of your intake.

15x Kratom extract has a dry talc powder-like texture, making it easily soluble in any drink, and it is produced by excessive boiling of ketum leaves. After the boiling process, you should wait until the moisture evaporates, leaving a thick and sticky substance called resins. Those resins are grounded into 15x kratom extracts; thus, they are much more concentrated than ketum powder.

15x means that 15 grams of ketum leaves make one gram of 15x kratom extract; now you can tell how concentrated this extract is; it is always best to use the minimum; users claim to feel effects only by using 0.5 grams of it.

A: It is not such a pleasant taste; some people describe its taste as salty liquor while others say it’s “grassy” and “earthy,” which makes sense as it’s a herb.

Q: When is the best time to take 15x kratom extract?

A: There doesn’t have to be a specific time you can take it whenever you want; morning may be the best time because that’s when you start your day, so it would make sense if you took any stimulant in the morning.

A: Some people claim to take 4-5 grams of 15x kratom extracts to maximize the effects, but it may be a lot for your body,

you should start with 1 gram as it is always best to use the minimum amount, especially if you’re a beginner.