You’ve probably heard about Bula Kafe Kratom and wondered why it’s not available via wholesalers. There’s a straightforward response that Bula Kafe is a kava and kratom shop serving coffee. After making national news, this Saint Petersburg monument has caused a stir in the kratom community.

Contents show
1 What Is Bula Kafe Kratom?
2 A Brief History Of Bula Kafe Kratom And Its Owner
3 Ross’ Enthusiasm for Kratom:
4 Allegations On The Vendor:
5 Introduction To Bula Kafe Kratom Vendor:
6 Product Line At Bula Kafe Kratom:
6.1 Ketum Powders
7 Do They Seem To Compromise on Quality?
8 How Much It Will Cost Me?
9 Does the Vendor Provide Any Discount Offer Or Coupon Codes?
10 How Is Their Customer Support Service?
11 What About Their Shipping and Payments Methods?
11.1 AKA and GMP Certification:
12 Do They Provide Lab Test Results?
13 The Final Remarks:

Those who live in the Sunshine State may be doing well since they know that kratom use is allowed in the state. Kratom is an uncontrolled product on the Atlantic coast, except Sarasota County, which passed legislation restricting the use of Ayurvedic herbs in 2014.

What Is Bula Kafe Kratom?

Bula Kratom Kafe is a drink that has been a local favorite for a long time and is the most excellent option. The Kratom strains they sell are characterized as varied, and most of their clients have been returning in droves to assist in a sampling of their Kratom tea. 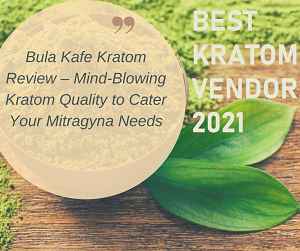 A Brief History Of Bula Kafe Kratom And Its Owner

Ross Kashtan is a businessman who grew up in the automobile industry. Ross thought he was acquiring a business when he purchased Bula Kafe, but after dealing with a few staff, he realized he had bought a dream. “You can’t buy a dream; you can only nurture it, take care of it, be open to people, and offer them a wonderful time,” he understood as time went on. (Video of the eighth anniversary)

His enthusiasm for Kava has grown as he has seen how it has naturally benefitted individuals, including himself, and how this ceremonial beverage draws people together, forming a tribe and a family-like community among the Kava Bars, or “Nakamals” as they are known in Vanuatu. In early 2017, Ross traveled to Vanuatu, the motherland of Kava, to discover first-hand how and why the plant is grown, harvested, and processed. His travels have since taken him to far-flung places like Costa Rica and Peru, where he has learned about and experienced other plant-based remedies.

Allegations On The Vendor:

Despite the popularity of their comfortable hangout and South Pacific flair, Bula Kafe came under fire in 2018 after a woman filed a claim against the proprietors, accusing them of being responsible for her son’s death.

Visits to three-neighborhood Kava and Kratom bars, according to the lawsuit, caused her 19-year-old daughter to experience mental excursions, mad scenes, and brain damage, which led to her being committed to a psychiatric facility.

For various reasons, Blue Kafe Kratom is another of the best Mitragyna Speciosa suppliers. First, they go out of their way to put a reasonable price on their products so that more consumers can afford them. If you are a regular customer, you most certainly purchase online and may find yourself spending a significant amount of money. Mitragyna Speciosa Unwind can assist you in this regard. They offer excellent bulk order savings that are difficult to resist.

They also value customer convenience, as evidenced by how they organize the goods by color to find the right strain. Blue Kafe Kratom is known for its low prices. They admit that other suppliers charge the same amount for bulk purchases and that they need to adjust their pricing. Client reviews for each strain are available at each location, so you may read about real people’s experiences while shopping.

When it comes to Speciosa, the Bula Kafe Kratom location offers a variety of strains and combinations. Because the page does not say Mitragyna, it’s preferable to go into the White, Green, Reddish, or Yellow Asian Tea region. Maeng Da strains are unmistakably abbreviated as MD. Nonetheless, numerous strains at reasonable prices can be found beneath each subject.

The available Kratom strains at Bula Kafe Kratom are

Their Kratom strains and Dead Conclusion Rosy Blend are among their many unusual Mitragyna Speciosa powders. The latter could represent a one-of-a-kind mix of recent reddish vein Mitragyna strains, including but not limited to Reddish Borneo and Rosy Sumatra.

The most common powders are Yellow Elephant, Super Green Maeng Da, Super White MD, Reddish Horned Leaf, and the advanced “Extra Plus” Mitragyna Speciosa. Their bread and butter are prohibitive mixtures and portion kilos, rendering them one of the first energetic and sought-after overstock dealers to emerge.

Do They Seem To Compromise on Quality?

Although online accessibility is essential, it means nothing if the dealer does not test their products. A respected dealer would allow it because it was the purest, highest-quality commodity.

Thing testing is one technique to make sure that quality is maintained. It must be indicated whether Bula Kafe Kratom locations test their products for quality. If you can’t discover the information you need fast, it’s probably not a vendor you want to work with.

How Much It Will Cost Me?

Does the Vendor Provide Any Discount Offer Or Coupon Codes?

How Is Their Customer Support Service?

Bula Kafe Kratom hasn’t had the chance to build a reputation as a forward-thinking vendor in the industry, but those who have tried them know what’s up. On Reddit, one enthusiastic client revealed their entire relationship virtually, saying, “Everything came in as asked.”

Excellent, attentive packaging; everything arrived vacuum sealed with a not-too-bad handwritten thank you note. Everything has a mind-blowing sensation and scent, and it’s a seamless smash. They put 10g of the highly white Maeng Da Kratom to the test. It went down smoothly, with no heaviness or annoyance.

What About Their Shipping and Payments Methods?

Bula Kafe Kratom does not play games with its customers by offering a plethora of distinct shipping options. For one ounce of Mitragyna Speciosa powder, you’ll pay 9.00 dollars’ instep.

You will be able to get in touch with the vendor at any moment to question your bundle based on the information provided by the vendor. Those who fill out a contact form often receive a response within 20-30 hours, depending on the day.

AKA and GMP Certification:

In any case, Bula Kafe Kratom concentrates on establishing a sense of the commercial core, and the American Kratom Affiliation backs customers’ needs (AKA). AKA enrollment by a vendor like Bula Kafe Kratom could be a good sign that their business is legitimate. In line with its setting, the AKA despises ‘shady’ sellers that try to justify their business practices by making bogus prosperity claims.

It confirms that all shippers have cleared the Extraordinary Fabricating Hone (GMP) Measures Program. It demonstrates that a vendor’s products have met specific security requirements.

Do They Provide Lab Test Results?

Each product is tested at the Blue Kafe Kratom lab, which maintains unfathomably modern and high-quality conditions. Clients can choose from kratom powders or kratom capsules to personalize their use in addition to the Speciosa extracts previously mentioned.

All major credit cards are accepted as forms of payment, and customers can receive free same-day shipping on their transactions. This organization claims they handpick each strain to ensure that customers receive unimaginably high quality. According to experts from their original website, the best amazing Ketum vendors will typically have Certificates of Examination that certify the exact composition of their items.

Bula Kafe Kratom could be a small-town vendor that values its customers and never fails to show up. This retailer offers unusual promotions and prizes regularly to show its thanks. If you’re looking for a change of pace after dealing with dishonest vendors and sluggish customer service representatives, you should get rid of them.

Bula Kafe Kratom is a true retailer with a diverse range of products. According to current estimates, the expenses are reasonable, and the cost savings are worthy of consideration.